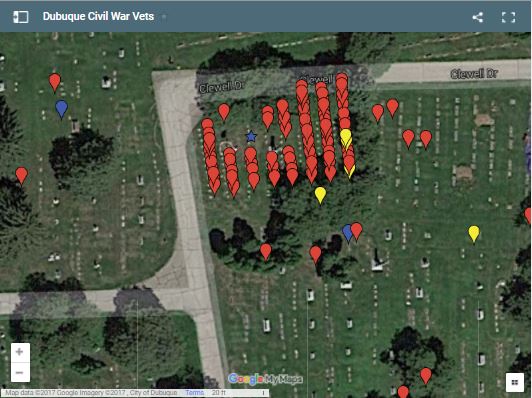 I first became active in locating and documenting Civil War veteran graves in the early 1990’s as part of a national campaign and ongoing mission of the Sons of Union Veterans of the Civil War, of which I was a member at the time.  At the time a paper form for each veteran was filled out and mailed to the SUVCW.  Unfortunately I never made copies of any of the forms I submitted.

In 2014 I started an effort to map Dubuque area veteran graves in cemeteries including Linwood, Center Grove, and Rockdale in Dubuque, Mt. Olivet in Key West and Asbury.  Only a select few have been mapped in Mount Calvary in Dubuque. This monumental effort still has a ways to go, more veterans to discover, more cemeteries to visit.

I am trying to develop an application that will allow anyone with a smartphone to participate and inventory and map veteran graves anywhere. I will keep posting more as I progress.

Until then, I have placed an interactive Google Map online for your enjoyment and education.  Each record for the dearly departed lists their name, the cemetery in which they are buried, their military unit, military company, rank, general notes and whether or not the were Confederate, died in service, killed in action, wounded, disabled, or prisoner of war.  The U.S. government distinguished between dying in service and being killed in action.  One poor Dubuque soldier was killed during a storm at Benton Barracks in St. Louis when a tree branch fell and killed him in his tent whilst he slept.  And just because you were wounded didn’t mean you were “disabled”, indicating you were missing a limb.

Of the 360 veteran graves inventoried,  one Confederate veteran, Charles Jones, son of former U.S. Senator George Wallace Jones, is buried in Key West.  Nine died in service, including James McManus of Company A of the 3rd Iowa Infantry.  McManus was shot during drills at Benton Barracks in St. Louis.  Another nine soldiers Gave All on the fields of glory.  Major Carl Schaeffer of the 5th Iowa Cavalry was killed defending a bridge from Confederates after his men had already crossed. He is buried in Linwood Cemetery.  Captain Samuel Newbury of the 12th U.S. Volunteer Infantry was a college classmate and fellow officer in the 12th with Henry Rathbone of Albany, New York.  Newbury was murdered by Confederate soldiers who did not want to taken Newbury prisoner, after he had already surrendered.  Newbury was shot at point blank range.  Still another nine had been wounded during their term of service.  Alpheus Palmer of the 16th Iowa Infantry was wounded at Shiloh in Tennessee and again at Iuka, Mississippi.  George Pregler of the 9th Iowa Infantry was wounded at Bentonville, North Carolina in May of 1865, a month after Lee surrendered to Grant at Appomattox Courthouse in Virginia. Three soldiers are listed as disabled including Colonel David Bremner Henderson, who was shot in the neck at Ft. Donelson and lost his left foot at the Battle of Second Corinth.  Henderson would go on to become the last Civil War veteran to become Speaker of the U.S. House of Representatives from 1899 to 1903.  .And ten soldiers where Prisoners of War.  Three of those, August Hammel, Peter Kiene Jr. and George W. Healey all were in the infamous Andersonville Prison in Georgia.

If you have any information on a veterans grave feel free to Contact Us here.