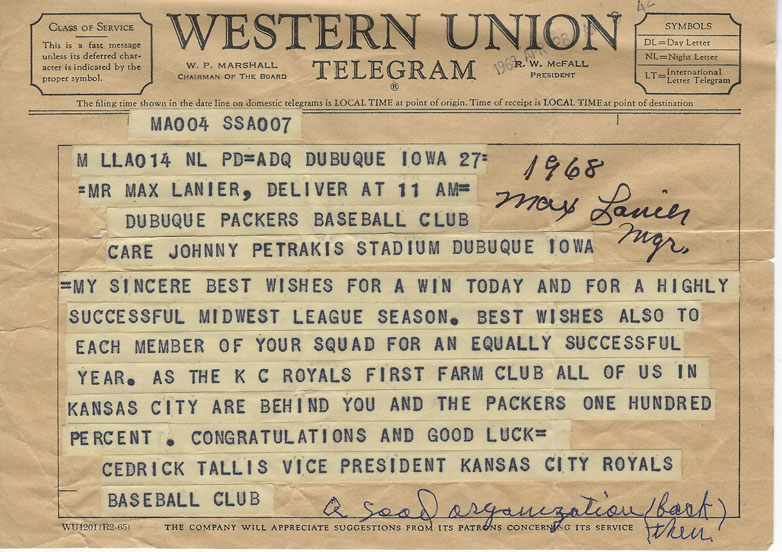 Charlie Finley had been looking for a magic bullet to turn his baseball club into a money-making winner for several years. In October 1967, Finley finally won the right from other MLB owners to move his Kansas City Athletics Baseball Club to Oakland for the 1968 season. The City of Kansas City and Missourians across the state were horrified. After all, the A’s had only been in Kansas City for twelve years.

U.S. Senator Stuart Symington of Missouri got involved and was vocal in his dissatisfaction with the way he felt Kansas City was treated given the investment in treasure and emotion they had poured into their A’s. Symington threatened to go after MLB’s antitrust exemption in Congress if a satisfactory remedy was not found quickly. Major League Baseball offered Kansas City an opportunity for an expansion team in 1971. Symington wanted better.

MLB long-considered expansion into additional U.S. cities in the 1960s as a way to fight the growing popularity of NFL football. In response to Sen. Symington, MLB decided to expand the American and National Leagues by two teams for the 1969 season. The NL would expand into San Diego with the Padres and into Montreal with the Expos. The AL would expand into Seattle with the Pilots and Kansas City would, after one year without MLB baseball, have the Kansas City Royals.

Ewing Kauffman purchased the rights to the Royals franchise and went to work building an organization in preparation for opening day of the 1969 season. Kauffman hired Cedric Tallis as his general manager. Tallis had worked for the Los Angles Angeles as a business manager when they entered the American League in the 1961 expansion and knew what it would take to build a farm system of talent for the Kansas City Royals.

The Royals would get to select unprotected MLB players from other AL teams in the expansion draft. But more players would be needed to develop a pipeline of players for the future. That meant organizing a minor league farm system.  That meant finding existing minor league teams that were for sale or were unaffiliated with a major league team. Tallis had only a few months to build an organization in time for the 1968 minor league season.

After the 1967 season, the Dubuque Packers, a Class A affiliate with of the Los Angeles Dodgers, was informed the Dodgers would not be renewing their affiliation contract. President of the Dubuque Packers Baseball Club, Johnny Petrakis, had to think fast. Petrakis had two issues on his hands that needed addressing before he could court another major league team. First, he needed a new, reputable manager for his ballclub. Second, the baseball stadium the Packers played in along the Mississippi River was in poor shape after the flood of 1965. Petrakis Park was a municipally owned stadium and was not receiving the funding required to compete with other minor league cities. The ball diamond was in decent enough shape and the bleachers were safe, so baseball could be played.

Petrakis courted and signed former two-time All-Star and two-time World Series champion pitcher with the St. Louis Cardinals, Max Lanier. Lanier had been coaching in the minor leagues since 1961. Prior to accepting the job in Dubuque, Lanier was managing the Batavia (IL) Trojans, a Baltimore Orioles affiliate. Now that Petrakis had a respectable manager for his team, a team that included future World Series Champions Bill Russel and Steve Yeager just the season before, he needed to find a new MLB team to affiliate with.

Petrakis turned his sights toward the expansion teams entering MLB in 1969. Petrakis and Lanier were able to work out a deal for the 1968 season with Cedric Tallis, who desperately wanted to get a farm system going for the Royals before their inaugural season of 1969.  This affiliation made Dubuque the Kansas City Royals first-ever farm team.

At the start of the 1968 season, Cedric Tallis sent a Western Union Telegram to Max Lanier, manager of the Dubuque Packers, wishing the team and the players success in the upcoming season and assuring Lanier the Royals organization was behind them.

“My sincere best wishes for a win today and for a highly successful Midwest League season. Best wishes also to each member of your squad for an equally successful year. As the K.C. Royals first farm club all of us in Kansas City are behind you and the Packers one hundred percent. Congratulations and good luck. – Cedrick (sic) Tallis, Vice President, Kansas City Royals Baseball Club.”