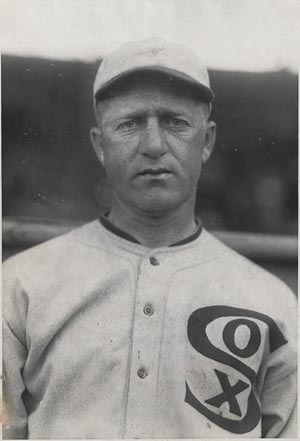 This photograph of Urban “Red” Faber was released to news agencies in June of 1923 by International Newsreel Photo after Faber hit his first career homerun in his tenth season in MLB, playing for Charlie Comiskey’s Chicago White Sox.

Faber hit his first big league homerun on June 7, 1923, at Yankees Stadium against the vaunted New York Yankees. Faber struck out Babe Ruth in the first inning, and hit the game winning homerun in the 1-1 ballgame in the seventh inning. The White Sox won the game 4-1.

Urban Clarence Faber was born and raised in Cascade, Dubuque County, Iowa. “Red”, as Faber would become nationally known, moved to Dubuque to attend St. Joseph’s Academy, a prep-school for young men in Dubuque, Iowa, in 1906, where he played baseball for the academy.

In 1909, Red went from playing for St. Joseph’s College, and the semi-pro Dubuque Tigers, to playing his first year in professional baseball for the Dubuque Dubs of the minor Three-I League. Faber played pro-ball for two years (1909-10) in Dubuque before moving up the latter of professional baseball.

In 1913, Charley Comiskey purchased Faber’s minor league contract from the Pittsburg Pirates and took Faber on his celebrated Chicago White Sox v. New York Giants World Tour. The tour was organized by one of Comiskey’s most trusted confidant’s, T.P. “Ted” Sullivan. Sullivan signed Comiskey to his first professional baseball contract with the Dubuque Rabbits (aka Red Stockings) in 1879.

New York superstar pitcher Christy Mathewson was supposed to go on the World Tour, but cancelled at the last minute. With the Giants down their star pitcher, Comiskey loaned the rookie Faber to Giants legendary manager John McGraw. At the end of the tour, McGraw asked Comiskey to sell him Faber’s contract. Comiskey refused. Both future Hall of Famers saw the bright future the young Faber was embarking on.

Faber’s 1914 MLB rookie class included another future Hall of Fame pitcher – George “Babe” Ruth. Faber and Ruth would often face off against each other over their long American League careers. Faber would give up nine homeruns to Ruth before his retirement in 1933. Ruth said he found Faber one of the more difficult pitchers to hit.

On August 20, 1929, Charlie Comiskey held Red Faber Day at Comiskey Park in Chicago. That day the White Sox were playing Babe Ruth, Lou Gehrig, and the New York Yankees. During the celebratory honors, the White Sox gave Faber several gifts, including a radio mounted in a wood cabinet stand. When Babe Ruth came over to shake Faber’s hand, the two men posed for a picture. Ruth described Faber as “the nicest man in the world.” Postcards were sold of the image of Ruth shaking Faber’s hand in congratulations in front of Faber’s mother and the radio. That day, Faber held the Bambino hitless (0-5) in the White Sox 5-4 loss to the Yankees.

Faber was elected to the National Baseball Hall of Fame in 1964.

[FROM THE ARCHIVES is a periodical focusing on interesting stories behind artifacts in the Library of John T. Pregler. Click on the images to access the online record of the pictured artifact.]